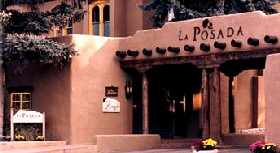 The La Posada Hotel (which means The Inn Hotel) in Santa Fe has the historic Staab House as its centerpiece. The mansion was built in 1882 by an old Santa Fe Trail merchant. Abraham Staab had earned a great deal of money from his days as a major supply contractor for the Union Army during the Civil War. He and his wife Julia built the mansion together, decorating it with European materials and furnishings.

The Staab family consisted of Abraham, Julia, and their six children, and they all lived on the second floor. The third floor, Julia’s pride and joy, served as the entertainment center for Santa Fe society. Times were happy for the family.

However, it was not to last – Julia’s seventh a child died shortly after he was born. Because of this, she suffered from a deep depression, and rumor has it that her hair turned white prematurely. After several more unsuccessful pregnancies, Julia became a recluse, hiding in her room up until her untimely death in 1896 at the age of 52.

Abraham continued to raise the six children in the mansion. Shortly after the turn of the century, the third floor was burned greatly by an accidental fire. In 1913, Abraham died of natural causes.

During the 1930s, the Staab House was purchased by R.H. and Eulalia Nason, who bought the property and the surrounding area in hopes of turning it into a hotel. Within a short amount of time, the Nasons had built several adobe buildings around the mansion and called their business La Posada Hotel.

Over time, the La Posada Hotel became a popular hangout for writers, cinematographers, and artists. It was so adored by the latter that an art school was held at the hotel over the summer months. However, it was most enjoyed by resident spirit Julia Staab. Rumor has it that Staab loved the mansion so much that she refused to leave it when she died.

The first recorded reports of Julia Staab’s spirit was in 1979. The story goes that an employee was working late one night cleaning when they witnessed the translucent apparition of a beautifully dressed woman standing beside the fireplace. Another tells of a security guard that saw the same exact woman and took off running in fear. Thirdly, the hotel operator witnessed her sitting in a chair. Every time, the woman mysteriously vanishes.

In more recent incidents, a bartender had glasses be thrown off the shelves on one busy night. On the same night, a veteran waitress repeatedly dropped trays as if they were being shoved from beneath, and the fireplace would turn on and off by itself.  Because of this paranormal activity, the La Posada Hotel has been the site of many investigations.

During the late 1990s, the hotel added more lodging, the Avanyu Spa, and the Conference Center, and it became a member of Rock Resorts. The hauntings continue to this day.

Courtyard by Marriott in Anchorage, Alaska